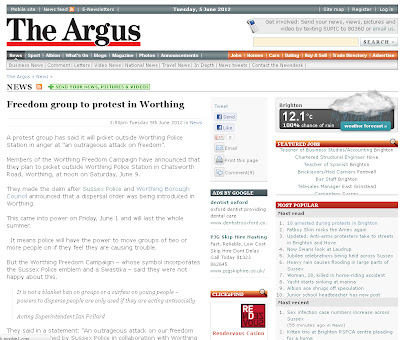 THE Argus have picked up on this Saturday's protest plans and have put a story on their website.

Sussex Police are still trying to claim the Section 30 is not the assault on our freedom that it so clearly is.

Says Acting Superintendent Ian Pollard, Sussex Police’s district commander for Adur and Worthing: "It is not a blanket ban on groups or a curfew on young people – powers to disperse people are only used if they are acting antisocially."

But that just begs the question. Who decides if people are "acting antisocially"? It's the police themselves,  with no need for any proper evidence!

They can even decide to apply the order if they claim it is "likely" that people will behave antisocially at some unspecified point in the near future.

We'll say it again - if someone really is considered to be behaving antisocially they can be arrested under existing legislation and processed through the courts system, which gives them a right to be represented by a solicitor and defend themselves.

If they're not actually doing anything wrong, then they should be left alone.

As far as the under-16s curfew issue is concerned, the detailed listing of the contents of the Order, from the link provided by Sussex Police, certainly contains the measures.

If there is a specific version of the order that has been issued for Worthing, maybe they should put the whole thing online for the public to scrutinise?

Better still, maybe they should have done that before they brought it in - and a proper debate could have been held with all the facts explored in detail.

As it is, all we can do is express our disquiet, urge others to do likewise and repeat our plea for the Section 30 order to be withdrawn in the clear absence of any genuine justification that outweighs the loss of our local liberties.
Posted by DP at 12:50